Glitter Hearts is a PbtA magical girl (and optionally mecha) pen-and-paper rpg. It's waaaay lighter in tone than something like Magical Burst or Princess The Hopeful, but it's not without tension.

To put it another way, Cute High Earth Defense Club Love is listed as an influence, but so is Sailor Moon.

Glitter's PDF is 138 pages, with great illustrations and a supernaturally perfect layout, and this makes it really easy to pick up casually.

Mechanically, if you've played a Powered By The Apocalypse game, playing Glitter Hearts will also be super easy. Its biggest divergence is that when you roll a complication, you can simply give up on what you were trying to do instead of getting messed up by it. This sort of pulls the teeth from 'failing forward', but it's also a really nice pressure-release mechanism for the PbtA engine and gives players an optional break from having their lives relentlessly complicated.

Character creation has some nice crunch to it, without getting difficult to manage. Characters are built from three playbooks each: their everyday identity, their Magical Archetype, and their Mystic Connection. Your identity determines your primary stat, your archetype gives you a set of class-specific Moves, and your connection adds tags and modifiers onto your kit. It's really cool, and makes character creation feel very engaging.

Combat and conflict also have solid crunch to them---somehow without compromising the simplicity of the PbtA engine. HP isn't just 1--4 boxes. Tags have mechanical bite. Also, in addition to a full kit of powers, players also have access to a meta currency called Power Pool that can be spent to boost rolls or fuel super attacks. The super attacks do trivialize climactic battles a bit (a 12+ insta-wins, and if you have enough pool you can just boost into that range), so you may want to give significant enemies multiple phases (or make sure their battle is at the start of a session, before anyone has gained any pool) if you want them to do something more than eat an ultra on their first turn in combat. Still, the super attacks aren't *too* easy to charge up, so the GM shouldn't worry about them coming out every battle.

Speaking of GMs, the GMing section is great, and includes a lot of troubleshooting advice for different common scenarios. It also adds a full bestiary and a very short sample adventure, plus some alternate rules for modding the game to run in different genres.

Overall, Glitter Hearts is a fun, really polished game that tells magical girl stories without committing the group to a particular tone or subgenre. It has a lot of fun design, and I'd recommend picking it up if you like any of its influences.

-Page 36, Connections, does not specify that you only start with one Move from your Connection. The other sections (archetype and identity) are clear, but Connection isn't.

I don't know if you ever answered
this, but will there ever be another way to get
a physical copy of the book? Through Drive thru or like a Con..etc.

Yes, I'm working on getting a series of physical books run and will update my website with info as soon as they are available.

My group is so looking forward to trying this one. The only problem is everyone wants to play instead of GM because the character possibilities are so enticing. Good problem to have.

That's a great problem to have. Hopefully someone takes the GM spot and you call can enjoy!

Do you get a weapon to start in Glitter Hearts if you don't pick one as a power? Or can you do no damage on a Clash roll if your Physical is a 0?

I’ve been looking over the PDF and I have a question; I saw that stats are capped at +3, but does that cap apply to bonuses too? I can’t find anything about that and I worry that piling pluses will kind of break the system.

If you are talking about piling on plus ones from the We can do it move, a person helps and then the person they are helping should take the action they are being assisted with.

There are rare occasions where things can be constructed in a way to allow many +1s to happen at once, and I've seen it happen once for one roll.

In things like combat, I will usually allow 1 person to help, but I've talked to other GMs are fine with letting multiple people help. The thing to keep in mind is the narrative and that the world won't wait. So as each person tries to help, the world should be acting alongside those actions.

Hey. I'm running this game this Saturday and I'm planning on writing a review for it on my site. It's going to be the first RPG system I review there (the site is still very new). Initially the reviews are only available in Portuguese, but we're working on having them in English as well.
Would you (Greg L) be interested in reading it?
Also...do you have any interest in translating this book to other languages?

Sorry for not getting back to you. These past couple of weeks were absolutely insane. Is there any way I can get in touch with you to talk about translations and to share the review?

I'm actually working with a company in Brazil for translation right now. But you can reach me at gleather@gmail.com

This game is so good and fun to RP with that, after picking it up in the BLM bundle, I bought it three more times so I could convince friends to play with me. Not sure there is a stronger form of recommendation I could give it than that lol

Thank you so much! I hope you all have the best time.

I've wanted this game since I first saw it on kickstarter back when it was first launched! Forgot about it until I bought the BLM bundle - was SO ecstatic to find this gem in it!! Seeing all the inclusive art is a real joy! <3

I've never played any ttrpg's before, but I'm having a great time just creating characters atm. (Cannot seem to figure out how to get just the character sheets to fill/save; I'm probably missing something, but if not, it may be a good idea to add them as a separate, fillable pdf file? IDK.)

Either way, even on my own I adore this game!! You did a great job and I'm super excited for this to be my entry game into ttrpg's!! Just gotta find some people to play with, lol!

I'm so glad that you found my game! There are many support files including character sheets at https://www.leatherman.games/games/glitter-hearts

Thank you so much for the link! I feel dumb for not noticing your site. >3< The printable Move lists are awesome! Much easier to look up than going through the whole thing. tysm again!!

You are very welcome.

I'm dying to play this game. Count me in. I play RPG on Roll20 every week, so I strongly recommend it

Out of the gate I just want to congratulate the creator on the incredibly diverse art of the book, picturing different genders and ethnicities. Thank you for this.

You're welcome. It was important to me that as many people as possible could see themselves in my book.

My good sir, you are awesome.

I'm also creating my own system and I hope I get it just as right as you did,

Gorgeously illustrated tabletop roleplaying game for creating stories in the 'magical girls' genre... Or rather, magical heroes, since it's got fantastic gender diversity throughout. It's Powered by the Apocalypse so the 2d6 mechanics look pretty solid and straightforward. There are also variant rules for 'vehicular heroes': think Voltron or Power Rangers. 5/5 stars – outstanding.

There are a few online communities that make role playing games easy.

https://roll20.net/ is one example. Also, I'm working with a company that is making Role, for online game systems. They are kickstarting now.

Wait I found this game in the bundle and I loveee it. However, can you mix elements and mechanics of this game to make a dnd homebrew campaign. Or can you make this game a long term campaign??

You can certainly set the game in a D&D type world and I think most of it will work just fine. Several people have been making long term campaigns and I think you can run the game for a full campaign.

Cant believe i bought the bundle not knowing this was in it, because this alone would have justified the bundle. a magical girls ttrp with easy mechanics and gorgeous art!  I especially appreciated the section that talked about power scales for the gm in reference to the creatures the PCs will have to defeat. even a monster thats very weak to the heroes can do a lot of damage to the general population which is important to keep in mind for a game like this.

Thank you for the kind words! I'm glad that you found my game in the mix. I hope that you have so much fun playing the game.

I'm so happy to have found your game in the bundle, I just rediscovered my love for the magical guardian genre and actually started to adapt some stuff from the PbtA system myself to use before I found Glitter Hearts!

I'm loving the art direction and the clear attention to providing a diversified look and feel to a genre that's dear to my heart!

Awesome! I hope you really enjoy the game and have fun with it.

I’m unbelievably happy and thankful that I found your game in the bundle. I’m also a contributor, and I wanted to let you know that this means a lot to me. Especially in terms of art direction and inclusion. The non-binary bear witch is someone like me haha! But the other characters are fantastic as well. Hey, if you wanna come over to Turnaya and the Immergrummel woods, we’re having a cake with you!

I'm so happy that you found my game! I'm still trying to go through the bundle cuz it keeps getting bigger and bigger! I'd love to come get some cake.

Thanks for reaching out!

I got this bundle yesterday, and I was delighted to find this gem in there! I'm already a fan of the Powered By The Apocalypse system, and I love your spin on it! I think you'll love to hear that this game will be my first time GM'ing, and the first tabletop for a couple young nieces of mine!

That's so awesome! I hope you all love it.

I got this in the bundle because it looked so damn good and omg, it looks super good! Tragically im terrible at reading rule books, but the art and what I saw it's fucking fantastic! I wanted a magical girl rp game for so long!! ;_; I would love to watch a campain on youtube or listen to a podcast about this. The edition its also super cool

Thanks! You can go to Leatherman.games and I've listed the youtube series that I did with Nerd Immersion. Also, we did a mini-season for my podcast Very Random Encounters - vre.show

I'm having trouble with the bookmarks in the pdf. The table of contents links work, but the bookmarks themselves are just technical jargon. 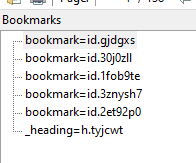 I will have to look into the file and see if something went wrong. Thank you for reaching out.